Our local archives are closed to the public. Please call ahead to request materials.

The mission of the West Liberty Public Library is to provide open access to cultural, intellectual, educational, and recreational information and ideas to enrich the community.

We house books, magazines, newspapers, and movies, we provide literacy and educational based programming for adults and children as well as host several online databases full of digital information. As a public entity, all of our resources are provided for free to patrons within the West Liberty Community School District, including community members of West Liberty, Atalissa, and Nichols.

The West Liberty Free Public Library serves the needs of the community and surrounding areas by providing and maintaining access to current resources for information and technology. We strive for continual program development, expanding collection materials, maintaining the highest administrative standards, increasing financial independence, and preserving our historical documentation for future reference. We also recognize the specific need for a central gathering space for community discussion and exchange of ideas to educate and identify the unique cultural diversity of our populace.

The West Liberty Free Public Library was established in 1904, one of 1,700 "Carnegie" libraries built in the United States between 1900 to 1930 by the steel magnate Andrew Carnegie. The Scottsman from Pittsburg had a vision for libraries to be public and free. 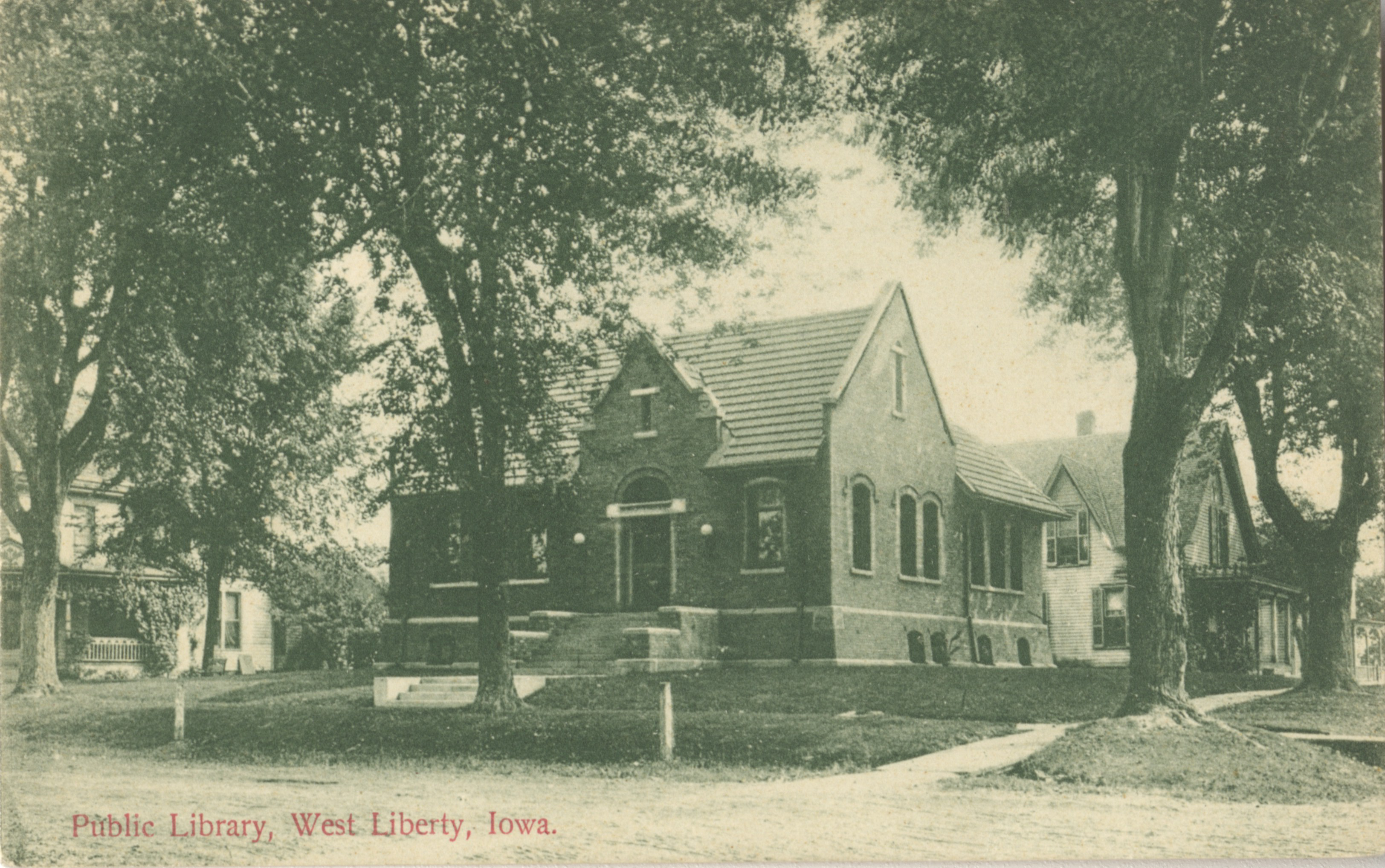 According to Footsteps Through Time, a book that highlights local history compiled by the West Liberty Aquarius Club in 2013, in 1904 West Liberty received a $ 7,500 grant from Carnegie to help build a free public library. Before then our “library” had been a small reading room run by the Young Women’s Christian Temperance Union in the 1880s.
The group eventually dissolved, but “seven young women kept the ‘Y’ library books circulating for five years,” according to the book. Afterward, the library was taken over by the People’s Library Association, which required a paid membership. At the time the library moved from the town hall to downtown. It had no permanent home, but the importance of reading became prominent during this time period, including a push to make information free and accessible to the public.
In a lengthy piece submitted to the newspaper The West Liberty Enterprise for its March 15, 1900 edition, the library board argued this very point:

“The growth in interest and use of books and magazines has steadily increased until now, we are glad to say it is well patronized,” wrote the board. “It affords a quiet, orderly place of resort, where the minds of old and young may be stored with useful knowledge, where proper habits of decorum are formed and cultivated, and where all influences are uplifting and elevating.” Ultimately, the board argued that the library could no longer be sustained by private donations and entertainment, they asked to submit “a proposition to make it henceforth the property of the town supported by a light tax.”
Well, they got their wish in 1904. 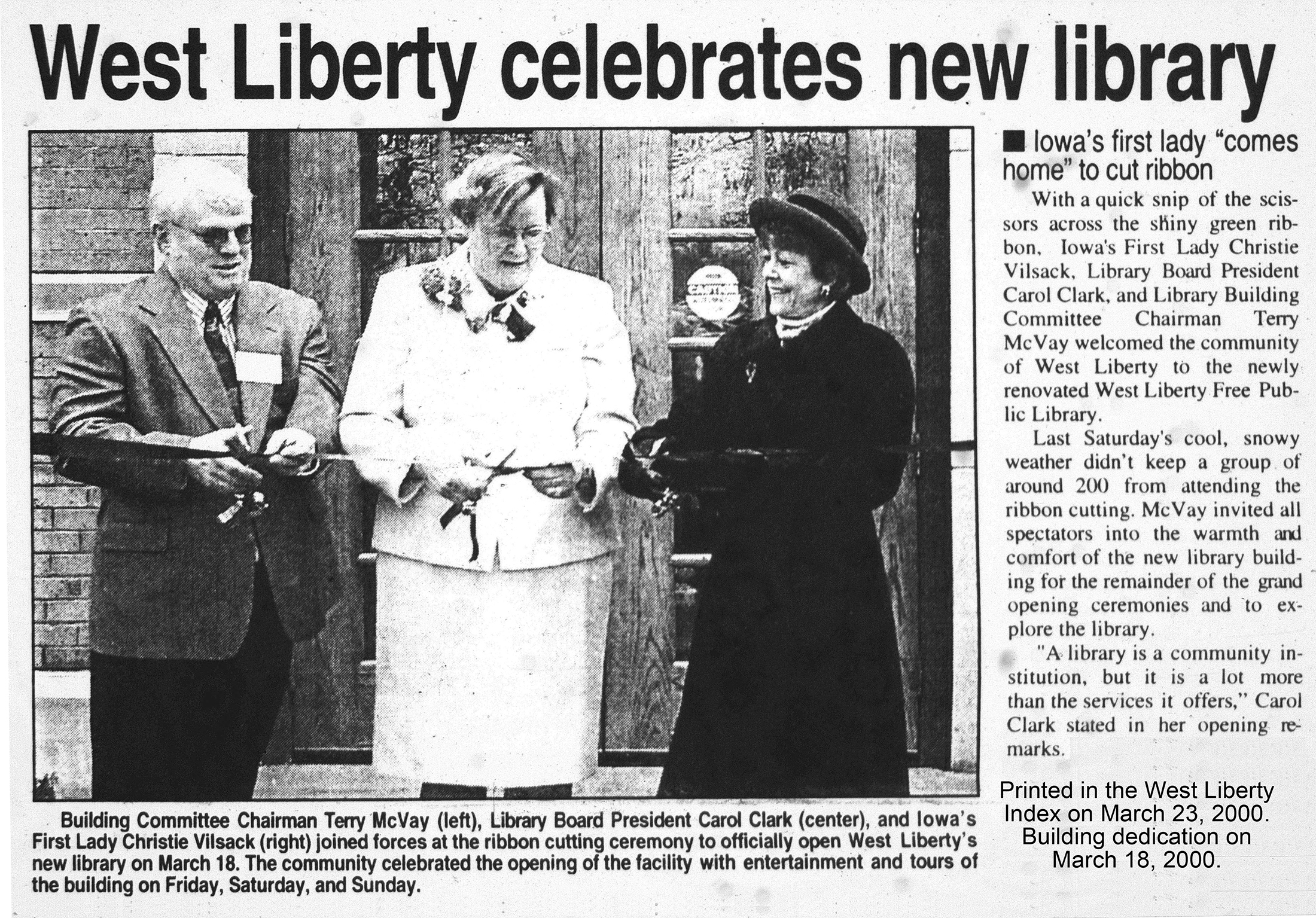 "After repeated correspondence covering a period of two years or more, carried on by various members of the library board, as well as by private citizens and the town, Mayor McIntosh has at last succeeded in striking a responsive chord, and the presumption is that our library will, at last, be housed in a beautiful home of its own,” stated the Feb. 11, 1904 edition of The West Liberty Enterprise.

With Carnegie’s donation of $7,500 came the stipulation that the town levy a tax of 10 percent of the cost of the building for yearly maintenance, a grand total of $800. The community agreed, showing up en masse to support the building of a public library during a special meeting organized by Mayor McIntosh. The crowd included “Fifty or sixty of our more progressive citizens.”

In 2000 the building was nearly quadrupled in size. The original red-roofed, iron spot brick building was expanded in an attempt to house the growing collection and keep up with the times. The renovators attempted to mix the old with the new, recreating the style of the original interior and exterior while including room for new technology, an elevator, a meeting room, and more.

In fact, when you visit our library today, you can see the original structure which makes up the south-west corner of the building. The curved main desk on the main floor of the West Liberty Public Library was once a curved wall. Evidence of the old and new existing together can be seen outdoors. A prominent 1904 is stamped on the southside of the building, while 2000 is stamped on the northside indicating the new expansion.

“This library has weathered more than a century of history and has provided access to information and promoted literacy throughout its lifetime,” says WLPL Director Allie Paarsmith. “I am proud to be the new custodian of this great legacy.”